Home » Blog » What is the ‘Stress Hormone’ Cortisol and How Does it Affect HGH?

What is the ‘Stress Hormone’ Cortisol and How Does it Affect HGH?

Cortisol, more popularly known as the “stress hormone” in everyday language, is a critical piece of the overall hormonal picture. Managing cortisol levels is essential for balancing levels of other important hormones. Like any hormone, the body requires an optimal amount of cortisol to function properly – too much or too little cortisol can have serious, negative impacts on your health, including for your human growth hormone (HGH) levels. 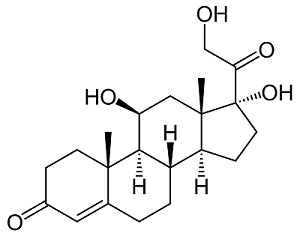 Read on to discover how cortisol impacts various facets of health, how it can contribute to hormonal imbalances that affect HGH levels and other hormone counts, and how you can correct any cortisol issues that are hindering progress in your own journey to wellness.

The adrenal glands, situated above the kidneys, produce and secrete cortisol. Alongside human growth hormone (HGH), testosterone, and other hormones, cortisol is a “steroid hormone.” Most animal species use cortisol or a similar version of it, such as corticosterone.

What Is the Function of Cortisol?

What Are Normal Levels of Cortisol in Healthy People?

In humans, the normal circulating concentration of cortisol is between 6 and 23 micrograms per deciliter (mcg/dL). Any count below or above that window is considered abnormal and must be addressed with your doctor. The chart below shows, respectively, normal, low, and high cortisol levels.

Age, Gender, and Other Factors That Affect Cortisol Levels

You should keep in mind the sex difference in normal cortisol levels between males and females. Women generally have higher levels of the hormone than men. Older age is associated with higher cortisol levels. Also, due to the diurnal rhythm of hormonal regulation, the adrenal glands secrete significantly more cortisol during the morning hours with drop-offs in secretion during the evening.

Cortisol, Stress, and the HPA Axis

Cortisol and the adrenal glands are components of the all-important hypothalamus-pituitary-adrenal axis (the HPA axis). The HPA axis is made up of three glands and multiple hormones and has many functions, including healthy HGH production in the pituitary gland. 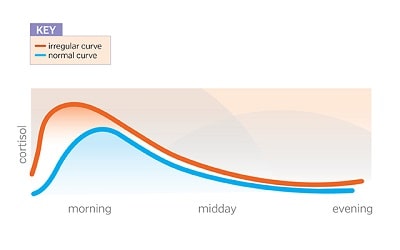 One of the most important functions of the HPA axis, though, is managing the “stress response” brought on by an outside stimulus such as a work disagreement or a close call in traffic – any event that triggers the classic “fight or flight” response to a perceived threat in the environment. The fight or flight phenomenon is actually a cascade of hormones designed to initiate a reaction to the threat. It begins in the HPA axis and involves other hormones and glands such as the amygdala.

In response to the stimuli, the hypothalamus release corticotropin-releasing hormone (CRH). In the blood, CRH triggers the release of adrenocorticotropic hormone (ACTH) in the pituitary gland which then stimulates cortisol secretion by the adrenal glands.

Stress, either physical or mental, leads to enhancement of ACTH secretion, which in turn increases cortisol levels; at times, the level may increase even 20-fold.

A stressful event will generate the fight-or-flight response – in fact, it is a necessary survival mechanism that allows you to react quickly to emergency situations that require your immediate attention. That is the evolutionary purpose of this mechanism.

However, because of the hormones involved in the stress response, chronic stress that is left untreated can have detrimental impacts on the HPA axis.

The Importance of Biofeedback Loops in Hormones 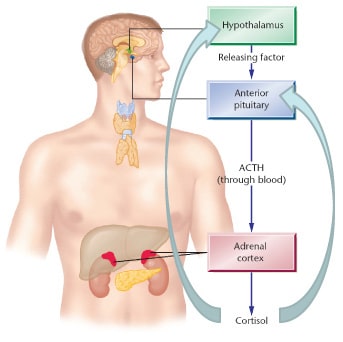 The HPA axis is a “biofeedback loop,” a complex self-regulating biological mechanism in which the hormone levels of each part of the axis are balanced in response to information from the others. The HPA axis operates its own biofeedback loop that controls cortisol secretion. It’s the hormonal equivalent of cause-and-effect:

When the body is chronically stressed, though, the adrenal glands continue to secrete large quantities of cortisol and adrenaline. This disrupts the biofeedback loop and causes a cascade of negative effects within the HPA axis. The basic cause-and-effect process:

How Does Cortisol Affect HGH Levels?

Because cortisol signaling is necessary for HGH secretion, abnormally low cortisol levels are associated with lowered HGH secretion. This is the reason that individuals who experience conditions such as Addison’s disease, characterized by limited cortisol production in the adrenal glands, often battle HGH deficiencies at the same time.

Can Other Hormones Trigger the Release of Cortisol?

We already explored the mechanism by which adrenocorticotropic hormone (ACTH) induces cortisol release by the adrenal glands. But can other hormones trigger the release of cortisol? In women, estrogen is also known to trigger the release of cortisol. If estrogen levels are high enough, they can cause abnormally high cortisol levels. This phenomenon is most often experienced by pregnant women and women undergoing estrogen replacement therapy.

If you follow a standard American lifestyle, chances are good that your daily routine is not beneficial for your cortisol levels. Here are a few of the biggest offenders when it comes to everyday activities and habits that can drive cortisol levels sky-high:

If the levels remained elevated, high cortisol can become dangerous. First, high cortisol disrupts the biofeedback loops that we discussed earlier, creating havoc in the hormone system and preventing the HPA axis — which includes the pituitary glands that produce growth hormone — from functioning as it should. High cortisol levels, over time, put you at greater risk of developing:

Among the patients treated for COVID-19 infections, those with normal cortisol levels were much more likely to survive and recover. 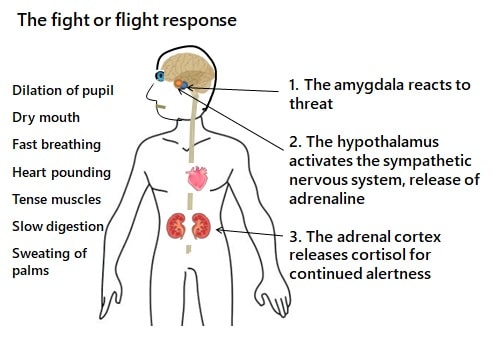 What Are the Signs and Symptoms of High Cortisol?

High cortisol in humans is the determining factor in a “Cushing syndrome” diagnosis. The condition can result from any combination of the cortisol-raising factors that we discussed in a previous section such as medications or chronic stress.

Here are the best ways to naturally lower cortisol levels. 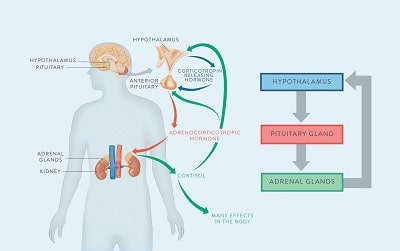 If you are serious about lowering your cortisol counts, consider one or more of the following supplements that can help you achieve statistically significant reductions in your circulating cortisol levels:

To optimize cortisol levels, you should modify what you do in addition to what you eat. Daily practices that you can use to reduce cortisol include:

Interesting Information for you
HGH For Sale
HGH Results 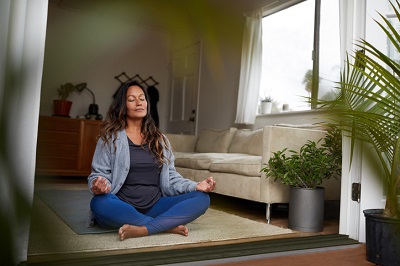 FAQs About Cortisol and HGHHGH limits cortisol release in individuals with Cushing syndrome (abnormally high concentrations of cortisol in the blood). Accordingly, HGH replacement therapy could be a treatment for the condition. Patients who receive HGH replacement therapy have significantly lower cortisol levels after completing their therapies compared to cortisol levels prior to beginning treatment. The bottom line: Yes, HGH therapy replacement can reduce cortisol effectively in individuals with high levels.

Does cortisol increase or decrease growth hormone? In healthy people, small increases of cortisol produce an appropriate slight increase in HGH. However, unhealthy cortisol levels that remain elevated over time decrease the pituitary gland’s production of HGH and can contribute to an HGH deficiency.

Can stress increase growth hormone? Short-term stress does trigger a release of growth hormone as part of the HPA axis-mediated stress response. Again, however, long-term stress that increases cortisol levels over time can contribute to an HGH deficiency.