The Essential Guide to HGH Levels Tests in Adults

Human growth hormone, often abbreviated as HGH, promotes healthy bone, muscle, and tissue growth in the body as well as fulfilling a number of other important “building” functions. Adults who experience an inadequate supply of HGH produced by the pituitary gland may notice an array of symptoms that hamper their quality of life and threaten overall health

The pituitary gland is an integral part of the highly complex neuroendocrine system, the web of intertangling functions between the brain and the hormonal glands found in and around the nervous system. Its ability to produce and release adequate amounts of HGH is vital for overall health.

HGH deficiency in adults is usually easily treated using hormone replacement therapy (HRT) in which exogenous HGH (sourced from outside the body) is administered in several injections spanning weeks or months under the supervision of a licensed doctor.

To diagnose HGH deficiency, your doctor may run any combination of the tests described further below. This is your essential guide to diagnosing human growth hormone deficiency in adults. 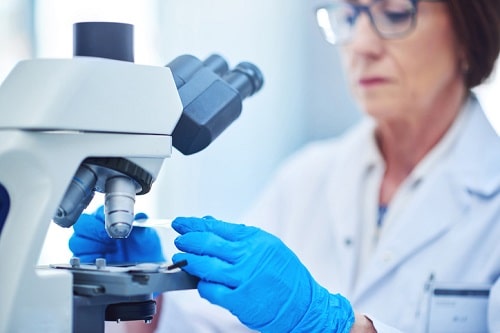 If your doctor suspects an HGH deficiency, he or she will order a series of blood tests to investigate circulating HGH levels as well as to rule out any other causes for the symptoms that you are experiencing.

Medical professionals rely on more than one test to diagnose a growth hormone deficiency, so when you visit the clinic and your provider suspects a deficiency, he or she will likely order some combination of the standard tests described below.

Why Is an ITT Ordered?

An ITT is the most reliable and widely used test for the diagnosis of a growth hormone deficiency in adult patients.
It’s important to remember that, on its own, an ITT cannot provide a definitive diagnosis of HGH. Rather, it gives an indication of overall neuroendocrine function and the need for further tests.

What Does an ITT Measure?

ITT’s measure the overall function of the hypothalamic-pituitary-adrenal axis (HPA), a major part of the neuroendocrine system, the term to refer to the coordinated activity of the brain (nervous system) and the hormone (endocrine) system.

When insulin is introduced to the body, the neuroendocrine system responds normally by releasing HGH to counteract the activity of the insulin. If such a release of HGH does not occur or occurs in less-than-optimal amounts, an HGH deficiency could be to blame.

How Is an ITT Performed?

Insulin is injected into the body to create a response to the hypoglycemic effect of the drug. Your healthcare provider then monitors your body’s hormonal response, specifically measuring cortisol, adrenocorticotropic hormone (ACTH), and HGH.

Why Is a GHRH-Arginine Test Ordered?

How Is a GHRH-Arginine Test Performed?

A GHRH-Arginine is a stimulation test to see how your body responds to a dose of GHRH, a signaling molecule located in the hypothalamus, followed by arginine. Blood samples then indicate pituitary function based on the body’s release of growth hormone and cortisol. It is a relatively straightforward procedure that can be performed in a few hours.

What Does a GHRH-Arginine Test Measure?

The test is one of the primary ways to measure pituitary gland’s response to the stimulation. In healthy subjects, the introduction of GHRH and arginine stimulate the appropriate release of growth hormone from the pituitary gland.

Why Is Glucagon Stimulation Ordered?

How Is Glucagon Stimulation Performed?

Glucagon released subcutaneously (under the skin) should normally trigger the release of both adrenocorticotropic hormone (ACTH) and growth hormone.
Your provider will take blood sugar and growth hormone level measurements prior to the administration of glucagon and several times during the test to gauge your body’s response to the stimulus

What Does Glucagon Stimulation Measure?

Glucagon tests measure pituitary function as a response to glucagon. Researchers still don’t fully understand why glucagon triggers GH release, but it has been proven nonetheless as a reliable indicator of a possible GH deficiency.

Interesting Information for you
HGH Therapy
HGH For Sale

Why Is a Macimorelin Test Ordered?

Macimorelin is a secretagogue of GH, meaning that it triggers its secretion once introduced into the blood. Macimorelin testing is used as auxiliary testing for GH deficiency. It is also commonly used in situations in which the patient cannot undergo the time-consuming and labor-intensive ITT.

How Is a Macimorelin Test Performed?

The patient ingests Macimorelin as an oral tablet. Because it is a potent stimulator of GH release, GH levels should rise to the “cutoff” level, where anything below the threshold may indicate a GH disorder.

What Does a Macimorelin Test Measure?

Why Is a Binding Protein Level Test Ordered?

Insulin-like growth factor-1 (IGF-1) is an important hormone produced in the liver that often works in tandem with HGH to carry out its “building activities” within the body.
Insulin-like growth factor-binding protein 3 (IGFBP-3) is a binding protein that works to transport IGF-1 throughout the body. HGH controls IGFBP-3 levels in the blood. Therefore, a GH deficiency may theoretically trigger lower levels of circulating IGF-1 and IGFPB-3.

How Is a Binding Protein Level Test Performed?

A blood sample is taken, generally from the arm, to be analyzed in a laboratory where the circulating IGF-1 and IGFBP-3 levels are measured by technicians. Patients can expect results to come back within a few days.

What Does a Binding Protein Level Test Measure?

A binding protein level test is designed to detect HGH deficiency through the theoretical deficiency of IGF-1 and IGFBP-3 caused by low HGH levels. However, many researchers remain unconvinced of the merits of these tests for accurately making HGH deficiency diagnoses in adults.

Why Is a Growth Hormone Stimulation Test Ordered?

Growth hormone stimulation testing is designed to measure the pituitary gland’s HGH-releasing response to stimulation in the form of medication that raises HGH levels in healthy people. Several options exist for the choice of medication intended to increase serum concentrations of HGH in test subjects.

How Is a Growth Hormone Stimulation Test Performed?

The clinician will take the patient’s blood through an IV at the beginning of the test to measure HGH levels. Medicine is then administered that should trigger the release of HGH in the blood, causing higher measurements in tests.

Once the medicine has had time to take effect, additional blood samples are taken for analysis to detect any rise in HGH levels. The procedure generally takes several hours, so an entire morning or afternoon is needed to finish.

What Does a Growth Hormone Stimulation Test Measure?

A presence of circulating levels of HGH above 10 ng/mL (10 µg/L) following the administration of medicine indicates normal pituitary function. A serum concentration of at least 10 ng/mL demonstrates a normal pituitary response to the test. Patients with HGH levels below this threshold might have an HGH deficiency that requires clinical intervention.

Time is an important consideration. The advantage of some tests over others — for example, binding protein levels testing – is that they can be done relatively quickly, allowing the patient to return home within just a few minutes of the tests.

Other HGH deficiency screenings, like an ITT, require several hours spent at the clinic. Patients can expect to spend significant time at the testing site, so you should plan accordingly if you require one of the more time-intensive screenings.

Some patients are understandably anxious. Others may experience discomfort at the idea of the necessary use of needles for many HGH deficiency tests. Our caring, friendly staff will discuss options for alleviating your anxiety during your visit, including the possibility of sedative medication to help you relax and enjoy your experience. 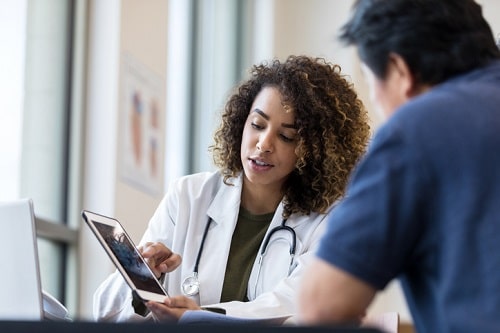 As we discussed earlier, doctors rely on at least two, often more, tests to make a definitive diagnosis of GH deficiency. Several disorders, such as adrenal insufficiency, can mimic the symptoms and test results that might indicate GH. Therefore, care is required to make an accurate diagnosis.

Depending on the type of test, results can sometimes take several days to come back. Once they do, we will schedule a new consultation with you to review your results. Always keep in mind that only licensed, experienced doctors are qualified to skillfully interpret your test results. The neuroendocrine system is complex, requiring a skilled set of eyes to accurately read the results of your HGH deficiency examinations.

Remember that diagnosis is just the first stage on the road to recovery. Advances in modern medicine allow for the prompt and effective treatment of HGH disorders in nearly all cases.
When you visit our clinic, we’ll take the time to discuss your concerns, order the necessary testing if our doctors suspect an HGH deficiency, and thoroughly review your results together to determine the next course of action.

Recovering your good health could be just a few weeks or months away. Thousands of patients across the US have discovered the rejuvenating promise of HGH replacement therapy. If you are experiencing a deficiency, then you could be one of the beneficiaries of therapy.