The term “sperm count” refers to the number of sperm cells present in a man’s semen. Sperm counts, in addition to indicating overall health status, have important implications for male fertility. One of the most common concerns that men have regarding low testosterone is the impact that this hormonal imbalance will have on their sperm counts.

If you are an American man worried about your sperm counts, you are right to be concerned. The authors of one recent study who looked at the decline in sperm counts among men in the US and abroad concluded that sperm counts have been declining rapidly in these populations for decades. In their press release, the experts wrote:

“This study is an urgent wake-up call for researchers and health authorities around the world to investigate the causes of the sharp ongoing drop in sperm count.”

The physiological reality of the relationship between testosterone and sperm production is complex. Here, we will delve into the details to explore how testosterone impacts sperm counts and what you can do to optimize your hormonal health for long-term sexual vitality.

How Does Testosterone Affect Fertility in Men?

As the primary androgen (male sex hormone), testosterone plays a central role in maintaining male fertility. In contrast to women, who usually go through menopause around the age of 40 and lose the ability to become pregnant, healthy men produce sperm for the entirety of their lives – meaning that, even late into life, a man is theoretically still fertile.

One of the main reasons that fertility declines as men move through life is the steady drop-off in testosterone levels that typically occur over time. Following a period of maximum testosterone production in his late teens or early 20s, a man’s circulating supply of testosterone falls by 1% on average each year. This means that the average 70-year-old may have roughly half the amount of testosterone in his blood than that of a young man in his physical prime.

The chart below shows the average rate of falling testosterone levels across time. 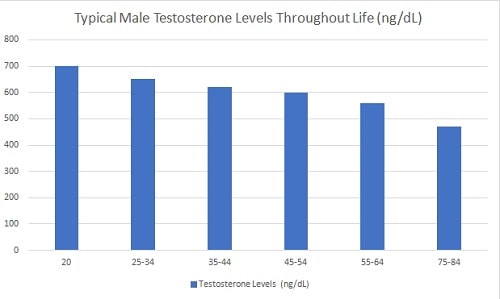 To produce sperm, the body relies on a complex interplay between various hormones, glands, and structures, with testosterone and the testes playing a critical role alongside other components. In clinical settings, the sperm production process is referred to as “spermatogenesis.” The hypothalamic-pituitary-gonadal axis (HPG axis) is the lynchpin of spermatogenesis, within which the related hormones act in concert to produce the ultimate end-product of viable sperm cells.

Through several hormone-mediated steps that make up the 2 ½-month sperm production process, germ cells located in the testes (the organs where testosterone is produced) transform into spermatozoa, commonly referred to simply as “sperm.” At the final stage of production, the sperm shift to the vas deferens, where they can remain for weeks. When mixed into a solution known as semen, the fully-formed spermatozoa are ready to penetrate and fertilize a female egg.

Earlier, we illustrated the decline in testosterone levels over time. In addition to testosterone levels dropping in the US and other developed nations, sperm counts are also dramatically declining. In fact, according to recent research, the average sperm count for the average American man has dropped by more than 50% in less than fifty years. Interestingly, no similar trends have been seen in certain developing regions like Africa, leading many endocrinologists to speculate about the underlying causes for these shifts in the advanced countries of Europe and North America.

A 50% loss of sperm count is extremely disturbing for public health groups attempting to figure out how to reverse the trend and save the sexual health of an entire generation of American men. According to the top experts studying this issue, the most concerning aspect of the downward trajectory of sperm production is that it shows no sign of slowing down. Dr. Shanna H. Swan of the Icahn School of Medicine at Mount Sinai reports that “this decline is strong and continuing.” What is causing lowered sperm counts in so many men? 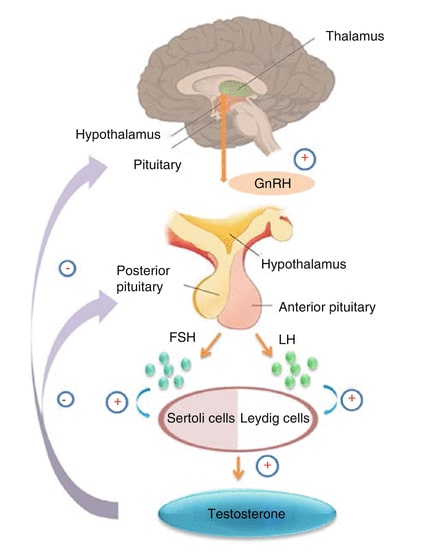 What Is Causing the Massive Decline in Sperm Counts for US Men?

A few reasons to explain the decline in sperm counts among US men might include:

What Is the Connection Between Low Testosterone and Infertility?

“Hypogonadism” (sometimes called “low T”) is a condition — often affecting aging men but increasingly common in younger age groups — in which the testes fail to produce an adequate supply of testosterone for distribution throughout the body.

How Testosterone Increases Sperm Counts in Men With Low T 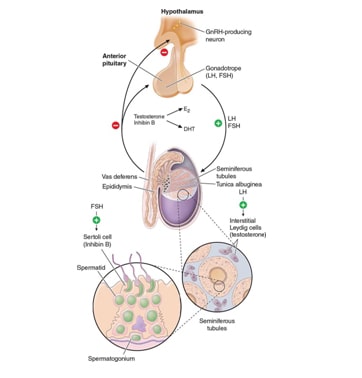 While not every case of testosterone deficiency results in lowered sperm counts, many men with deficiencies (as measured by blood tests and compared to the reference ranges in the chart above) also show the signs of decreased sperm counts as well as reductions in sperm quality.

For men with low testosterone who are receiving testosterone replacement therapy (TRT), abruptly discontinuing doses of testosterone may have a negative impact on fertility. Too much or too little testosterone is potentially harmful to sperm counts. Accordingly, in order to prevent complications that could have long-term impacts on your fertility, always consult with an experienced endocrinologist (hormone doctor) before beginning or terminating TRT. 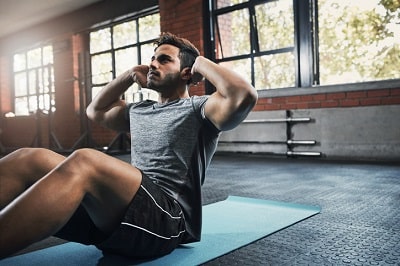 Researchers interested in optimizing hormone health for men have discovered – and subsequently vetted through research – several strategies that any man can use to boost and maintain healthy sperm counts throughout his life. Here are the proven ways to keep your sperm counts in the ideal range:

If you have any of the risk factors described here for low sperm counts, the first step to protecting your fertility is to schedule an appointment with an expert endocrinologist. When you meet, your doctor will discuss your personal medical history, perform a physical evaluation, and, if he or she suspects a low sperm count, order the proper testing.

Depending on the results, your doctor may advise that you begin a testosterone replacement therapy (TRT) regimen. Recovering a healthy sperm count is possible with the right lifestyle changes and medical interventions – including, when appropriate, TRT.