HGH and Thyroid Health: Can Growth Hormone Cause Hyperthyroidism?

Hormone replacement therapy (HRT) is the medical practice of introducing exogenous hormones (produced from outside the body) into the blood via injection. Several types of HRT exist for the safe and effective replacement of various hormones, including HRT for human growth hormone (HGH). Human growth hormone, as we’ll explore more in detail further on, plays a crucial role in overall health as it is heavily involved in several biological functions in the human body.

Many patients who may be interested in HGH therapy to restore the hormone to optimal levels in their bodies may hesitate because of concerns over how HGH therapy could affect their thyroid health. In this article, we’ll discuss the close relationship between HGH and thyroid function, whether HGH is right for patients with thyroid conditions, and what expectations patients should have for how HGH may affect their thyroid health.

The Thyroid and Its Physiological Functions

As a gland that secretes hormones vital to nearly every aspect of health, the thyroid is an indispensable member of the endocrine system, the network of hormones and structures that produce them throughout the body. It is located in the neck above the Adam’s Apple.

The thyroid is responsible for the secretion of three hormones:

The human body regularly manufactures and distributes over fifty hormones that actively direct the body’s activities to ensure normal function. HGH and the thyroid hormones described earlier are some of the most important.

What Do the Thyroid Hormones Do?

As we mentioned previously, the so-called “thyroid hormones” perform vital work in the body. The thyroid hormones’ range of activity is so wide, in fact, that they are active in nearly every human cell across system. Their activities can be categorized in the following ways:

Because the thyroid hormones are active in literally almost every cell in the body, their influence is far-reaching. Addressing each singular health effect, therefore, of thyroid deficiencies would fill a novel. For this article, which focuses on the interaction between the thyroid and HGH, we will mainly discuss the last two functions described above (metabolism and growth regulation). However, readers should be aware that the activities of the thyroid explored here constitute only the metaphorical “tip of the iceberg” regarding the many roles that the thyroid plays in overall health. 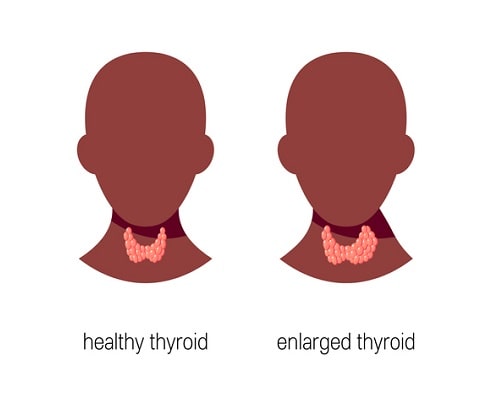 WordA dysfunctional thyroid can dramatically affect an individual’s health. Due to a number of complex factors, thyroid conditions are increasingly common in the United States. Lifestyle and genetic factors linked to thyroid dysfunction are:

The most common diagnoses associated with improper thyroid performance are categorized as:

“Hypo” is a Latin prefix that means “too little” or “not enough.” It is a common addendum to medical terminology that indicates the insufficient function of a gland or organ. In the case of hypothyroidism, the thyroid is not fulfilling its obligations in terms of carrying out the activities it is responsible for such as maintaining homeostasis and ensuring optimal metabolization.

The symptoms associated with hypothyroidism are wide-ranging and include:

Hypothyroidism can develop at any stage of life. However, it is most commonly diagnosed as people enter their mid-lives, especially among women. Many patients with hypothyroidism suffer unnecessarily for years, often chalking their thyroid symptoms up to the everyday stresses of modern living.

If you are unusually tired all the time, with no evident reason, then hypothyroidism could be to blame. If you suspect hypothyroidism, or any other issue with your thyroid, discuss your concerns with your primary care physician. He or she can recommend proper testing to determine if, in fact, you are experiencing a condition caused by poor performance of the gland. 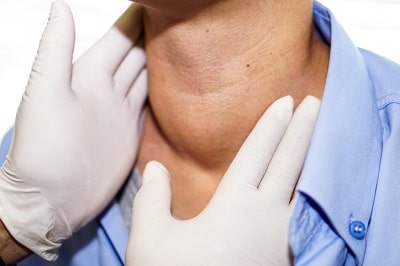 The prefix “hyper” in Latin means “too much” or “too active.” So, hyperthyroidism is the opposite condition of hypothyroidism. In patients with hyperthyroidism, we see that their thyroid produces an excess of the thyroid hormones, which can be equally devastating to health as too little of the hormones. The image below depicts an enlarged thyroid, a symptom that may indicate the presence of hyperthyroidism in many instances.

In contrast to the symptoms of hypothyroidism, which “slows down” the body’s processes due to reduced circulating levels of the thyroid hormones, hyperthyroidism often skyrockets metabolism and nervous system activity in patients due to higher-than-normal levels of thyroid hormones in the blood.

The symptoms associated with hyperthyroidism include:

Hyperthyroidism is frequently caused by an autoimmune condition called Graves’ Disease. In affected patients, we see that an abnormality in the immune system causes mistaken signals to be sent to the thyroid that mimics the activities of thyroid-stimulating hormone (TSH) — the hormone responsible, as its name suggests, for catalyzing thyroid hormone production. As a result, higher-than-normal levels of thyroid hormones are released into the blood, causing the symptoms described above.

How Are Thyroid Disorders Treated?

Either through surgery or medication, most cases of both hypothyroidism and hyperthyroidism are treatable. Getting proper amounts of essential vitamins and minerals through diet is often an effective way to restore thyroid function.

Although rare, some cases of thyroid disorder can be traced to insufficient levels of iodine, an important nutrient that is crucial for thyroid health. Historically, getting enough iodine has been a challenge for many populations, leading to widespread thyroid dysfunction. However, thanks to idione fortification in foods like table salt, the instances of thyroid deficiencies induced by low iodine intake have plummeted.

In cases of thyroid cancer, treating the disease is necessary to see any improvement in thyroid function. Lastly, medications such as synthetic thyroid hormones (levothyroxine) can help upregulate thyroid function in patients with hypothyroidism.

How Does Human Growth Hormone Interact With the Thyroid?

HGH and the thyroid hormones originate from interconnected structures — namely, the pituitary gland, thyroid, and hypothalamus. This connection is called the hypothalamus-pituitary-thyroid axis. The axis is an area of intense interest for researchers hoping to gain greater insight into the complicated ways that hormones interact with one another.

The pituitary gland is a pea-sized structure in the brain. It is responsible for producing HGH and sending it out into the blood to perform its important work. The hypothalamus is also located in the brain, near the pituitary gland. Its primary roles include regulating emotions, directing sexual behavior, optimizing body temperature, and stimulating hormone release.

The Thyroid Hormones Regulate HGH Production in the Pituitary Gland 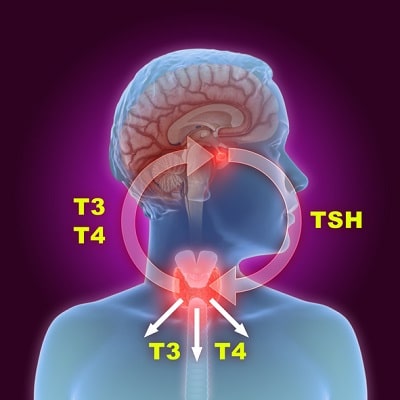 Research demonstrates that thyroid hormones regulate HGH production by the pituitary gland. This means that, in cases of hypothyroidism, the decreasing activity of thyroid hormones indirectly results in decreased production of HGH, causing a deficiency of the important “building” hormone.

The potential causation of HGH deficiency by an underperforming thyroid indicates a need for testing the thyroid when low HGH is detected through testing to determine if the state of reduced HGH supply in the blood is, in fact, due to undiagnosed hypothyroidism in the patient. In many patients, growth hormone disorders “mask” the presence of hypothyroidism, meaning that symptoms mistakenly attributed to poor pituitary function are actually caused by a dysfunctional thyroid that does not produce adequate amounts of vital thyroid hormones.

The presence of underlying hypothyroidism is often “unmasked” when the symptoms previously believe to be caused by an HGH deficiency persist even after optimizing blood concentrations of the hormone. The extent of the interaction between HGH and the thyroid is so great that undiagnosed hypothyroidism is discovered in 36-47% of patients undergoing HGH replacement therapy.

Again, an experienced provider of HGH therapy will do their due diligence by screening patients with HGH deficiencies for hypothyroidism because of the extremely high co-occurrence of the two conditions.

Is HGH Therapy Safe for Patients With Healthy Thyroids?

Patients who have healthy, functioning thyroids are called “euthyroid.” Although some argument exists for the need to supplement some patients undergoing HGH replacement therapy with the thyroid hormone thyroxine (T4), one study found no significant thyroid changes in euthyroid patients on HGH replacement regimens.

The available evidence suggests that although careful health monitoring — including checking thyroid function regularly – is a necessary component of HGH therapy, patients who have healthy thyroids should not be overly concerned about how HGH supplementation might affect their thyroid unless they notice any of the symptoms of thyroid dysfunction described earlier.

Although some reports indicate that HGH supplementation may result in lowered pituitary sensitivity to thyrotropin-releasing hormone (TRH), the hormone we discussed earlier that is primarily responsible for stimulating HGH production. Theoretically, this decreased sensitivity to the hormone by the pituitary gland could result in ramped-up activity by the hypothalamus and the thyroid to compensate. However, one study found that HGH therapy is unlikely to affect hormone secretion levels by the thyroid.

Therefore, patients — especially ones with no history of thyroid disorders — should be cautiously optimistic that HGH therapy will likely not adversely affect their thyroid health and may, on the contrary, promote better functioning of the gland.

Could Patients With Hyperthyroidism Benefit From HGH Therapy? 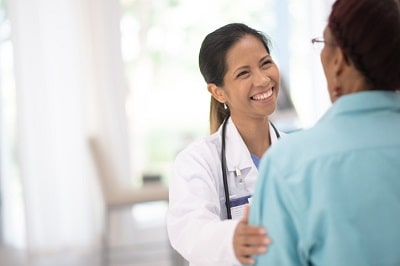 Although patients battling hyperthyroidism might benefit from HGH supplementation, corrective action targeted at treating the root cause of disordered hormonal function is needed in such cases – in this instance, by restoring normal function of the thyroid through separate, concurrent therapy.

The Bottom Line on HGH Therapy and Thyroid Function

Due to the close functional relationship between the thyroid and pituitary glands signified by the hypothalamus-pituitary-thyroid axis, patients with thyroid conditions should be aware of the potential effects that HGH therapy could have on their thyroid health. Although tentative evidence exists linking HGH therapy to elevated levels of T4, one of the hormones produced in the thyroid, there is little evidence of long-term health implications for thyroid health posed by HGH supplementation.

Often, HGH deficiencies “mask” thyroid problems in patients with conditions that have gone undiagnosed – often for years or even decades. During your consultation, as a routine component of the screening procedure, your doctor will go over your medical history and perform a battery of blood tests, including checking thyroid function.

With the right precautions, patients and doctors in most situations can safely navigate HGH therapy that successfully produces its intended results of restoring HGH to their optimal concentrations in the blood without jeopardizing the long-term thyroid health of patients.