Home » Blog » HGH and Professional Sports: Why Do Athletes Use it?

HGH and Professional Sports: Why Do Athletes Use it?

Making a career in professional sports is a cut-throat proposition. At the highest levels of performance, even the smallest competitive advantage could mean the difference between going home with the gold or going home empty-handed. Athletes across the world, and their trainers, are always on the lookout for the latest developments in terms of supplementation that might give a much-needed performance boost to outshine the competition.

Human growth hormone (HGH), a hormone produced in the pituitary gland and an important component of the “building” activity within the body, is a popular choice of supplement among athletes because it is well-tested, relatively safe, and not as widely criticized as higher-profile hormones like testosterone as “cheating.”

In this article, we’ll discuss the benefits and drawbacks of HGH supplementation, why athletes turn to it so often and explore some of the controversies surrounding HGH use by professional athletes.

What Role Does HGH Play in the Body?

The pea-sized pituitary gland in the brain produces HGH. It then travels throughout the body via the blood, performing a number of important functions. Once it reaches the liver, it stimulates the release of insulin-like growth factor 1, or IGF-1. Although most people associate HGH with its role in spurring growth in children, the hormone is crucial throughout life.

HGH and IGF-1 then work in tandem to promote growth throughout the body, among other functions. The primary activities of HGH in the body include: 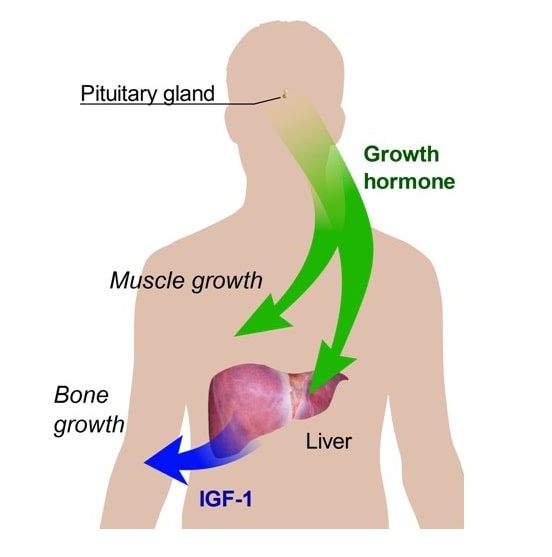 This graphic below illustrates the distribution of HGH and IGF-1 throughout the body and their “building” activities.

How Does HGH Affect Athletic Performance?

So, why are athletes so interested in HGH? The answer is that it can have profound effects on an athlete’s physiology. The main ways that HGH can improve athletic performance include:

The most important aspect of HGH supplementation for athletes to consider is the health status of the individual receiving it and whether they need additional HGH. Many athletes who already have healthy circulating HGH levels are unlikely to see a marked benefit from HGH therapy.

HGH therapy can by physically transformative for athletes who have deficiencies. However, the supporting evidence for HGH’s ability to improve athletic performance in people who have plenty of the hormone already is less clear-cut.

Let’s address the athletic performance-boosting claims of HGH proponents one at a time.

The medical literature is clear that HGH can be a potent muscle-booster for people whose pituitary glands produce too little on their own. While HGH supplementation is a proven way to increase muscle mass in people with deficiencies, it may not be effective for athletes who already have a well-developed physique.

While some studies point to muscle size and strength gains in healthy athletes using HGH, others suggest that it does not confer the same measurable effects in healthy people that it does it those with HGH deficiencies. One point of confusion for athletes who supplement using HGH may be that they often administer the hormone in combination with anabolic steroids. This could lead to the false attribution of HGH to muscle growth when the reality is the steroids are largely or completely responsible for the results.

In short, the scientific jury is still out on the muscle-boosting properties of HGH for athletes who do not have a pre-existing deficit of the hormone.

Claim #2: HGH Improves Endurance in Athletes Without a Deficiency

The strongest case for HGH supplementation among athletes may be that it augments cardiovascular output. In one study of over a hundred healthy athletes (presumably with normal levels of HGH prior to testing), participants were given either a placebo or an HGH injection for two months.

The results of the study showed an average 4% improvement among participants receiving HGH injections in terms of how fast they could cycle on a stationary bike. While 4% may seem like a small gain in the “real world,” in the world of athletics, a 4% improvement in cardio function could be the edge that a competitor needs to come out on top.

More research is needed into the mechanism by which HGH elevates exercise capacity in healthy athletes. The preliminary results, though, are promising. They constitute the hardest evidence so far the HGH could provide meaningful benefits to athletes that justify its use.

HGH supplementation for injury prevention and repair is perhaps the most exciting potential application for athletes because it switches the perception of HGH from “enhancer” to “healer.” As we mentioned earlier, promoting healing and growth in bone and muscle tissue is one of the major activities of HGH in the body. Having enough circulating growth hormone is essential for a person with a fracture to recover fully.

Injuries are the most common reason for early retirement among athletes. Although the setbacks for athletes caused by injuries range from minor (sprained ankle) to more severe (torn ACL), any injury, regardless of its severity, threatens an athlete’s ability to perform at his or her peak. 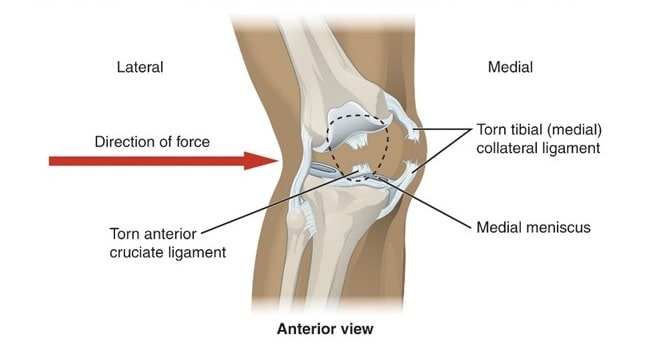 An ACL tear can be devastating for an athlete. HGH may help reduce recovery time.

Naturally, the “repairing” role of HGH has led many to speculate about the hormone’s ability to prevent injury in athletes. An abundance of medical literature indicates that HGH prevents fractures in populations that are most susceptible to them, such as the elderly and those with deficiencies. But can HGH prevent and/or repair injuries in athletes?

Researchers from the University of Michigan and other institutions around the world are hard at work uncovering the potential of HGH to enhance recovery from debilitating athletic injuries like ACL tears. With these potential benefits in mind, it’s easy to understand why athletes are willing to shell out hard cash for HGH supplements.

HGH supplementation comes with risks, especially for those who don’t need it because their levels are already sufficient or who seek treatment from an unlicensed provider who does not provide the proper testing to determine the athlete’s HGH needs. Some commonly reported side effects of HGH supplementation include:

It’s important to note that many side effects of HGH supplementation can be prevented by seeking care from a licensed, experienced provider who will perform the proper screening and monitoring throughout the process.

Shifting the Paradigm of HGH: The Challenge of Moving HGH Into the Mainstream

The biggest hurdle that proponents of HGH therapy face is the widespread perception of HGH as a “doping” drug akin to steroids and other banned substances.
Currently, as we will discuss later, HGH is widely considered a “performance-enhancing drug,” or PED. The concern over HGH, as with all banned substances, comes from a pure motivation to level the playing field and ensure fair competition among athletes. After all, people watch sports to see what their favorite athletes can achieve through their innate talents and carefully honed skill sets – not who has the best trainer with the hottest performance-enhancing supplements.

For HGH advocates who see its potential benefits for athletes, the battle that they must fight is in the arena of public opinion. To move HGH into the mainstream out of the shadows, it is necessary to convince the public that HGH is a legitimate medicine for athletes rather than an unfair way to gain an advantage over the competition. As Christopher Mendias, professor of orthopedic surgery at the University of Michigan puts it, “If it’s medically beneficial and it doesn’t have performance-enhancing benefits, then it’s ethically difficult to deny HGH to professional athletes.”

A Brief History of HGH Use in Professional Sports 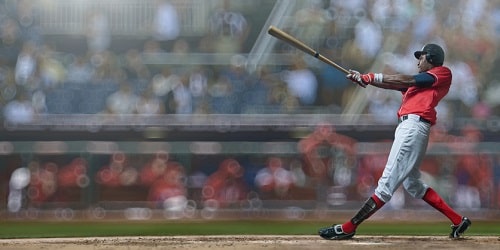 Performance-enhancing drugs (PEDs) have a long and storied history within professional sports. Since Arnold Schwarzenegger’s heyday nearly 50 years ago, the use of illicit substances to gain results has been commonplace across various sports and throughout the world. One of the major reasons that PEDs are so common is the huge amount of money involved in professional athletics. A Superbowl victory in the NFL, for example, could mean several million dollars in additional contract revenue for a victorious quarterback.

Likewise, the industry actors that supply athletes with PEDs make out with lots of cash. Greg Anderson, for example, who allegedly acquired steroids for Barry Bonds, Gary Sheffield, and other famous MLB sluggers, was worth millions of dollars by the time the legal authorities caught up to him.

With PEDs’ connection to black market economics and its association in popular opinion with cheating, we can understand why many people view substances like HGH negatively – even in spite of the evidence for many of them, including HGH, that they carry legitimate medical benefits.

Synthetic HGH was first introduced to the market in 1981. It was initially intended for the treatment of HGH deficiencies in children to promote healthy growth. However, HGH soon made its way to the world of professional sports.

Starting in the bodybuilding scene of California, HGH use became more widespread among athletes throughout the 80s. The trend finally caught the attention of the International Olympic Committee, which added HGH to its list of banned substances in 1989. Other sports leagues and organizations followed suit shortly thereafter.
Despite its banning, HGH supplementation has only gained popularity among athletes since the 80s. Athletes in nearly every major sports use HGH in the modern era.

Is HGH Supplementation Legal for Athletes?

HGH supplementation is not legal for athletes. Its use in the United States is restricted to clinical provisions by medical doctors in cases of legitimate deficiencies. According to federal law, “recreational” use of HGH for improvements in athletic performance is illegal. Additionally, a number of professional sports organizations, as listed below, ban the use of HGH among athletes and hands out hefty fines, banning, and other severe punishments for athletes who test positive.

HGH is banned by the following organizations:

These organizations, and others, in addition to testing for a whole range of banned substances, attempt to screen athletes for HGH supplementation.

Testing for illegal HGH supplementation in athletes is problematic for monitoring agencies because accurately differentiating exogenous HGH (sourced through supplements) from endogenous HGH (produced within the body) is difficult to assess. The two most common tests for HGH are known as the “markers approach” and the “isoforms approach.” 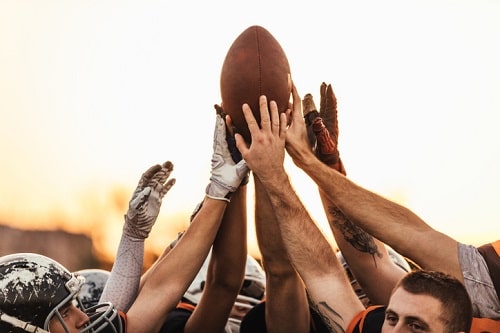 Since screening by sports organizations began in earnest in the 90s, thousands of athletes have tested positive for HGH supplementation. However, because of the physiological issues involved in making concrete determinations regarding which athletes are supplementing and which are not, the findings remain in dispute, with many athletes claiming false-positives.

The Bottom Line: What Are the Pros and Cons of HGH Use by Professional Athletes?

The pros of HGH use by professional athletes potentially include:

The cons of HGH use by professional athletes potentially include:

For the time being, athletes should exercise caution when seeking HGH for improved performance and/or injury prevention. As research continues to shed new light on the activities of HGH in the body, we may see a paradigm shift that opens up the possibility of moving HGH off the banned substances list. However, at the moment, HGH supplementation carries many risks for professional athletes – including potential banishment from their respective sports.